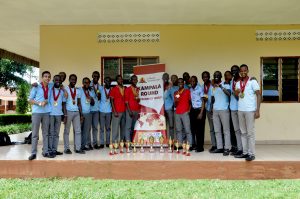 This two-day event took place on 27th – 28th of March at Galaxy International School Uganda and later Wonder World for the awarding ceremony.

With a culture build, this became a piece of cake for the Light Academy boys even if very many Super power joined this year. Very many boys excelled in writing and debating, thus winning the best overall writing team in senior, and the second performing school overall.

Many teams qualified from our school for the global Round.